The ‘We’ in our National Pledge 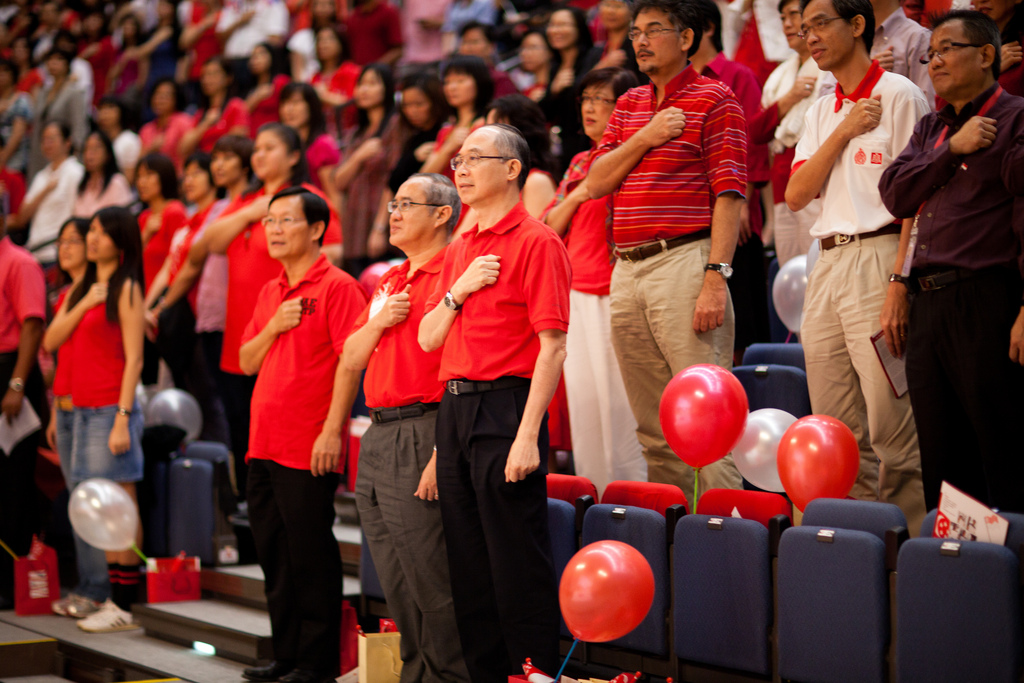 “We” – it is the first word in the Preamble to the Constitution of the United States : “We the People…”

It is also the first word in our National Pledge: “We, the citizens of Singapore…”

It is an example of what in modern rhetorical theory has come to be known as a “catachresis” – a linguistic imposition that brings into existence that which it posits. The “we” in “we the people” is the application of a pronoun “used by a speaker to refer to himself or herself and one or more other people considered together”, as the Oxford English Dictionary defines “we”, to a much larger grouping of people largely unacquainted with each other – in the US, China or Singapore – thus bringing into existence the “imagined community” that we collectively posit by referring to ourselves as “we”.

When it was applied by the framers of the United States Constitution to the “people” of the 13 colonies, they in effect claimed for the people the sovereignty that had hitherto reposed in the king – with the royal “we” thus replaced by the popular “we”.

The first time we heard “we” used to describe us was in the famous press conference that the founding prime minister Lee Kuan Yew gave on the occasion of Singapore’s Separation from Malaysia. We all remember the tears he shed that day when he said he would always look back on our leaving Malaysia as “a moment of anguish”.

What most of us forget – till we were reminded of it at last year’s National Day Parade – was that he had ended the press conference on an altogether different note, with these stirring words: “We are going to have a multiracial nation in Singapore. We will set the example. This is not a Malay nation; this is not a Chinese nation; this is not an Indian nation. Everybody will have his place, equal; language, culture, religion… And finally, let us, really Singaporeans – I cannot call myself a Malaysian now – we unite, regardless of race, language, religion, culture.”

“I cannot call myself a Malaysian now” – that transition from one “imagined community”, Malaysian, to another, Singaporean, was fraught with tension.

It is too embarrassing 50 years later to recall the pathos of “I cannot call myself a Malaysian now”. We cannot understand why that transition from Malaysian to Singaporean should have been difficult.

Let me further illustrate this with another example, this time a statement made on March 17, 1966, barely seven months after Separation: “A national identity for Singapore is not possible and the very idea itself is ludicrous.”

Who said that? Lee Siew Choh? Lim Chin Siong? Possible, since the Barisan Sosialis and the Communist Party of Malaya thought Singapore’s independence was “phoney”. But it was neither Dr Lee Siew Choh nor Mr Lim who uttered this statement.

Perhaps David Marshall then. After all, Mr Marshall authored a number of colourful statements in the course of his career. But alas, this wasn’t one among them.

The person who delivered this categorical judgment on the impossibility – the sheer ludicrousness – of a Singaporean “national identity” was none other than S. Rajaratnam, the author of the Singapore National Pledge and the muse of a Singaporean Singapore.

The clue is provided in what else Mr Rajaratnam said on March 17, 1966: Reunification with Malaysia was “inevitable”, he said. The forces of history will bring Singapore and Malaysia together again, he prophesied.

So you see, the subconscious of The Straits Times then – for it was still a paper serving both Malaysia and Singapore simultaneously – its subconscious probably still held that Singapore could not have a “separate” national identity apart from Malaysia. Separation was still assumed to be temporary. Singapore may be a separate political entity – for a while, at any rate; but it could not have a separate “national identity”.

That Mr Rajaratnam too could hold this view in March 1966 is all the more remarkable when one recalls that he had penned the first draft of the National Pledge just the month before, on Feb 18. His name has become inseparably linked to the Pledge, but there is also one other name whom we should remember in connection with the Pledge.

The idea for the Pledge in fact originated with Mr Ong Pang Boon, then Education Minister. It was he who first proposed that schoolchildren should have a flag-raising ceremony every day, accompanied by the recitation of a Pledge. And it was he who sought Mr Rajaratnam’s advice on the wording of the Pledge.

The draft Mr Rajaratnam first produced read thus: “We, as citizens of Singapore, pledge ourselves to forget differences of race, language and religion and become one united people; to build a democratic society where justice and equality will prevail and where we will seek happiness and progress by helping one another.” (The emphases added are mine.)

His implicit, perhaps unconscious, logic seemed to be that Singapore may be a separate political entity – with “citizens” to call its own – but its possession of a national identity awaited fulfilment in the not-so-distant future when we are reunited with Malaysia.

We don’t have Mr Rajaratnam’s re-drafts or Mr Lee Kuan Yew’s edits, but the final version that schoolchildren my age first recited on August 24, 1966, six months later – I remember that day clearly, as though it were yesterday; I was in Primary 6 – began definitively and powerfully thus: “We, the citizens of Singapore”.

No hiatus or gap between “we” and “citizens”. The “we” that we learnt to call ourselves from that day coincided with “citizens of Singapore”. We thus came into existence as a collective pronoun: “We”.

ACCEPT , NOT FORGET, OUR DIFFERENCES AND THEN GO BEYOND THEM

I draw your attention next to what Mr Rajaratnam’s first draft enjoined us to do: “forget differences of race, language and religion”.

Forget – meaning erase, extinguish, expunge, obliterate differences of race, language and religion? Can that be possible?

How does one forget differences of language, for instance? Every time I hear a Chinese Singaporean speak Mandarin or Hokkien, I am bound to remember, not forget, that I do not know Mandarin or Hokkien, and that these languages produce world-views quite different from the languages I am acquainted with. And as for forgetting differences among religions, who but an agnostic could have taken that as a serious possibility?

The formulation in the Pledge as we know it – “one united people, regardless of race, language or religion” – is more realistic in its command. It does not deny racial, linguistic or religious differences exist, let alone call for their obliteration. Rather, we are enjoined to go beyond them.

“Remember we are different – and then accept our plurality, set aside our differences, go beyond them,” the Pledge urges. That is difficult enough but far more possible than: “Forget our differences – and then make sure you never remember them, erase all memory of our plurality”, as the first draft would have demanded of us.

Sometimes, we have to remember our differences in order to go beyond them – as when we make provisions for minority representation in Parliament, for instance. We could have said racial differences don’t matter, let’s forget them, no need for a Presidential Council for Minority Rights, no need for minority representation in Parliament. And of course if the electorate had then elected only Chinese to Parliament, we would have discovered racial distinctions did matter after all, for the minorities would most certainly have felt excluded.

It remains to be seen which is the better system, but both share a similar recognition: You cannot get E Pluribus Unum – out of many, one – by simply denying that there are many.

“We, as citizens of Singapore, pledge ourselves to forget differences of race, language and religion” or “We, the citizens of Singapore, pledge ourselves as one united people, regardless of race, language or religion”. By choosing the latter, Singapore’s founding leaders recognised that we cannot be One without also acknowledging that we are Many, any more than one can produce a rainbow by smudging the different colours.

This is the first and most important thing we should note about the “we” in our Pledge: It does not call for the erasure of differences. We are not enjoined to forget our separate identities. Rather, we are urged to accept our plurality. And we are urged to go beyond them – go beyond our separate racial, linguistic, religious, cultural identities, so as to encompass the imagined community that lies beyond our differences.

It is difficult in retrospect to piece together what happened in those six months, between February 1966 (when Mr Rajaratnam penned the first draft of the Pledge) and August 1966 (when we first recited the Pledge as we know it), but somehow our founding leaders – perhaps unknown to themselves, perhaps tentatively – began imagining in those months the possibility of a national Singaporean identity, and became firmer in their conviction that Singapore shall indeed “forever be a sovereign democratic and independent nation”, as the Proclamation declares.

For the meaning of the Pledge – the meaning of “we” – was not obvious from the start. The Pledge itself wasn’t the National Pledge as we now call it from the word go. Indeed, it wasn’t till 1987 that the Pledge even featured in the National Day Parade, when an extended version of the song, We Are Singapore, was sung as the grand finale, together with the recitation of the Pledge. And it wasn’t till 1988 that we recited the Pledge with the right fist clenched to the heart, as we do now; before that we raised our right hand as when taking an oath – as indeed the Pledge was initially conceived, an oath taken by schoolchildren before the flag.

The meaning of the Pledge, in other words – the meaning of “we” – accrued as the story of our island-nation unfolded. As we became more confident that a Singaporean national identity was not only possible but was beginning to take shape, the “we” became more substantial and the Pledge became a more powerful statement of our ideals.

It was the future of our own elaboration that imbued our originating symbols and ideals with meaning; our history did not unfold like a macadamised road from our originating symbols and ideals. It was our commitment to the possibility of a national identity – We, the citizens of Singapore – that produced the “we”; we did not begin with a fully conscious “we” that came festooned with a ready-made national identity.

It must always be possible to say “we, the citizens of Singapore”; that the elaboration of a “we” does not require the obliteration of differences – racial, religious or linguistic; that we accept our pluralities – political and social; that becoming a more perfect “we” or acquiring a deeper national identity, shall always be a matter of becoming more than the sum of our parts, not less, addition, not subtraction.

It was an incredibly brave thing that our founding generation did 50 years ago. The notion that a collection of such diverse peoples could have anything in common was indeed “ludicrous”.

But just as God said in Genesis: “Let there be light, and there was light”, our founding generation made a decision to exist – “We, the citizens of Singapore” – and so we came into existence. But unlike the “fiat lux”, this is a decision that has to be repeated over and over again, emphatically, or “we” literally shall cease to exist.

Janadas Devan is Director of IPS. This excerpt of his opening remarks at the Singapore Perspectives 2016 conference was published in The Straits Times on 19 January 2016.