The case for restoring CPF contribution rates of older workers

By Damien Huang and Christopher Gee

We recently recommended that Central Provident Fund (CPF) contribution rates for all workers be equalised at 37 per cent, restoring the rates for older workers back to be on par with those of younger workers currently.

To many, the change would be a sensible and fair approach. But some have responded strongly to say that they or other employers would be less willing to hire older workers with these higher rates, while others worry about the lower disposable incomes for the older workers.

We would like to address these important points and to highlight the broader societal cost of not making the change now. 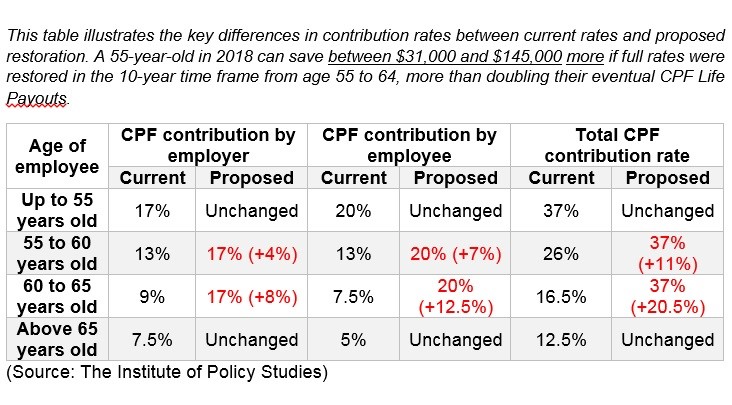 CPF contribution rates for workers above 55 years old were first reduced in 1988, and then again in 1993 and 1999. The reductions came in the midst of economic downturns in an open, trade-dependent economy facing potential labour oversupply.

The urgent priority then was to protect jobs that paid the bills, but the cost was a lowering of retirement adequacy for some workers in the long term.

Employers only willing to hire workers in their late 50s and 60s on the basis that they are cheaper than younger workers are unlikely to be interested in investing in their older workers to enhance their productivity.

Employers like these should not be encouraged, particularly not in an ageing Singapore where an ever larger share of the workforce is approaching that 55-year age threshold.

Here are three more reasons why the time has come for Singapore to consider raising the CPF contribution rates of older workers.

First, the labour market is tighter today than in late 80s and 90s and will continue to be so in the medium to long term.

This is because of the age structure of the workforce, with one in four Singaporeans expected to be over the age of 65 by 2030.

Gen-X workers will be in their late 50s when 2030 comes around, and sometime before that, the Singapore workforce will begin to shrink as there are fewer younger workers entering the labour market than those leaving due to retirement. Employers must plan for a workforce that mirrors this population profile.

If there are job losses as a result of this proposed CPF contribution rate restoration, we should be prepared to lend every assistance to retrenched older workers to be re-employed by employers who are progressive enough to recognise the real value of these workers.

Many support measures have already been put in place to help employers recruit, retain and upskill their older workers.

An increase in older worker contribution rates may thus be the push that companies need to jumpstart greater job re-design for older workers, maximising their experience and skills for greater productivity, and shifting mind-sets that associate productivity decline with advancing chronological age more powerfully than any awareness campaign.

Second, we should act now to avoid retirement adequacy gaps in the future.

One long-term effect of lowered CPF contributions for workers aged 55 and above is that they find it harder to reach their minimum retirement sums. This leads either to income insufficiency in retirement or them having to turn to familial resources, public assistance schemes, and/or charity.

As the population and the workforce ages, ensuring Singaporeans’ income adequacy in retirement is a major societal concern. The lower CPF contribution rates for older workers works against this objective by curtailing their capacity to save in the critical years just before they might retire.

Current workers already above 55 will not derive the full benefit from our recommendation of restoring contribution rates and will require additional support from other social spending to meaningfully improve their income post retirement in the years to come.

For each year we delay a CPF contribution rate restoration for older workers, the burden on social spending will likely increase.

This means taxes in the future might have to increase beyond already planned increases (from 2021 onwards) announced in Budget 2018 to pay for healthcare, pre-school education and security.

With higher contribution rates, however, more older workers in the future would have the CPF Life payouts to meet, for example, the S$1,379 a month required to cover the basic needs of Singaporeans aged 65 and over reported in a recent study by researchers Ng Kok Hoe and Teo You Yenn.

A CPF rate restoration also means younger cohorts of lower-income workers who fail to meet the Full Retirement Sum by age 55 have a better chance of achieving those levels by the time they retire.

Those still repaying home loans post-55 will also be less likely to have to use out-of-pocket cash to pay monthly mortgage instalments.

Increasing contribution rates is therefore another essential step in improving the efficacy of the CPF system, especially if more Singaporean retirees can satisfy their basic living needs from their CPF Life payouts.

Third, such a move will send a strong signal to society about the value of older workers, and by extension older Singaporeans. The longer we delay equalising CPF contribution rates for older workers, the more we entrench this view that older workers are less valuable for nothing more than their age.

The heart of the matter here is of course ageism. To employers who say they cannot afford to accommodate older workers, we say age discrimination is a luxury Singapore cannot afford.

Neither is this merely an issue of workplace adjustment. Employees and employers are part of society, and our society as a whole can and must change our norms and mindset. For example, an employer in retail or food and beverages can provide older workers with chairs to rest weary legs.

But society as a whole must embrace such adjustments until they become the quotidian practices of an empathetic, inclusive and successful society of the 21st century.

It is 20 years since CPF contribution rates for older workers were lowered to the current levels.

It is also now time for the whole of society, workers, their employers and the Government to restore them to prevent the entrenchment of ageism in our employment practices, and to improve the retirement adequacy of Singaporeans.

Damien Huang is a Research Associate, and Christopher Gee is a Senior Research Fellow at the Institute of Policy Studies, National University of Singapore.

This piece was first published in TODAY on 9 July 2019.