SP 2015: Should pragmatism be retained as Singapore’s governing philosophy? 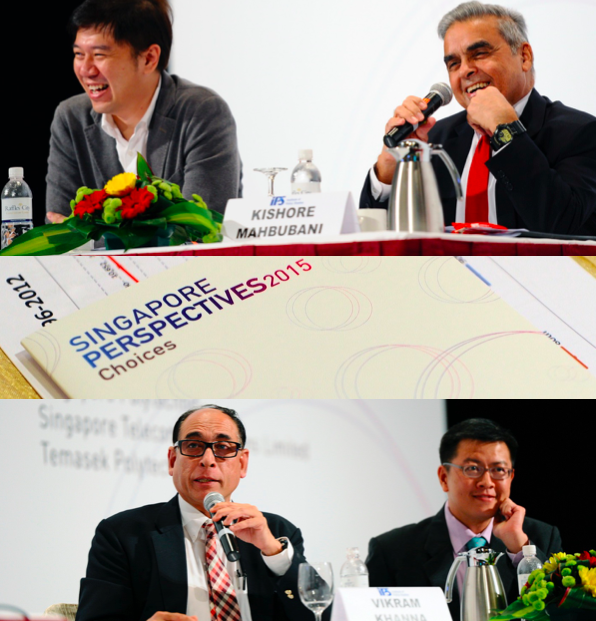 The third session of Singapore Perspectives 2015 featured a debate on the motion: “This conference resolves that pragmatism remains important and should be retained as our governing philosophy”.

Chairperson Ms Soon kicked off the session by asking some questions about the motion:

Before the debate began, a poll was conducted, which revealed that 72.9% of the audience sided with the proposition, with the remaining 27.1% siding with the opposition. The debate started proper with Mr Tong from the proposition, narrating the story of how he overcame hardship to finally be a successful social entrepreneur. However, he realised later on that being pragmatic was also quite important when chasing ideals. Because one has made promises to uphold these ideals, they would also have to occasionally submit to pragmatism in order to deliver these promises. While this is not what people want to hear, it is the reality.

The opposition, represented by Mr Khanna, opened the session by making an important qualification — that in the Singapore context, it was quite pointless to argue against pragmatism and it was not his intention to do so anyway. Rather, the opposition posited that while pragmatism should retain its place in the governmental repertoire, its significance should be reduced while that of other guiding principles should be increased. Mr Khanna also questioned the effectiveness of pragmatism as the overarching principle for governance, elaborating that what might be pragmatic for some might not be so for others.

Speaking for the proposition, Professor Mahbubani posed a challenge to the opposition, quoting former Deputy Prime Minister S. Rajaratnam, that “it is exactly unsentimental pragmatism which has made Singapore bearable for all Singaporeans.”

Opposition speaker A/P Tan disagreed with Professor Mahbubani’s statement, arguing that pragmatism should not be elevated as an end and advocated for a more even-handed approach in governance. A/P Tan believed that principles such as multiculturalism, equality and compassion would work for Singapore in the long term. The opposition also made the point that when pragmatism evolves into an ideology, it has the tendency to suppress discourse because of its fixation with end results.

Mr Tong responded to the opposition, asserting that it was only through being pragmatic that one would be able to see idealism come to fruition. Professor Mahbubani pointed out that pragmatism is exactly the opposite of ideology because it is not enslaved to a single principle but adapts and adopts. The opposition then corrected Professor Mahbubani’s statement, pointing out that pragmatism could become ideological when those who wield it insist that it alone be the governing philosophy.

A recess was called at this point, and the audience was polled for a second time. The results at the midway point read 56.4% for the proposition and 43.6% for the opposition. Ms Soon then invited questions from the audience.

A member of the audience nudged the proposition to take a position on the Iraq War, which American President Barack Obama had called a “dumb war”. The proposition answered by saying that it was a worthwhile endeavour for Singapore, which had helped to strengthen its relations with the United States. Professor Mahbubani also warned the audience that small states that ignore geopolitical realities stand to lose. Chairperson Ms Soon intervened, asking the proposition if they regarded pragmatism as a philosophy or merely a means to an end. Professor Mahbubani replied that it was in fact a philosophy that had its roots in many cultures and civilisations.

The opposition again emphasised its position, that pragmatism should not be cast aside altogether and the approach should be balanced. An audience member commented that when it came to human relationships, pragmatism was not considered a positive trait. Hence, he could understand why an overly pragmatic government was not seen to be a good thing for some. Mr Khanna agreed with this analysis wholeheartedly. The proposition, on the other hand, dismissed the comment, arguing that individuals should be able to make their own approach when it comes to relationships but that government was different. The opposition, however, countered this claim by arguing that how a government operates would inevitably influence its people.

Another question came from the floor asking if pragmatism should not be the overarching principle, then which ideology should we follow? If we took absolute freedom of expression, for instance, it could have undesirable ramifications on society as seen in the Charlie Hebdo crisis in France. The opposition agreed with this point, reiterating their earlier position that pragmatism should not be abandoned altogether but form a part a set of principles that the government uses to make decisions.

The final question asked if mistakes had been made when being pragmatic, such as the decision to go ahead with the integrated resorts. Mr Tong surprised the audience when he voiced his personal views on the matter rather than maintaining his position based on the debate. He explained that he would take the moral route and disagree with the building of the integrated resorts. Meanwhile, despite being in the opposition, Mr Khanna agreed with the pragmatic decision to develop the integrated resorts because they did create jobs and contributed to the economy. A/P Tan maintained his stand while Professor Mahbubani added that being pragmatic does not mean that one does not make mistakes — there are times when pragmatism leads to mistakes and it is important to address these mistakes.

Mr Khanna began the closing arguments for the opposition by clearly stating his position — that a principled stand was very important because what might be pragmatic for some might not be for others. In the quest for a specific form of development, what was deemed disruptive to government objectives were cast aside — political opposition, artists and playwrights. A/P Tan rounded up the opposition’s arguments, underlining his point that the very nature of pragmatism stifles discussion and encourages people to take a very impersonal, transactional approach to life.

The proposition concluded the debate with Professor Mahbubani raising concerns of this drive to move beyond pragmatism, as voiced by the proposition. He explained that while we could be idealistic, we should also be cognizant of the constraints imposed on a small nation-state such as Singapore. Small states therefore have to concede to certain geopolitical realities, continue to be nimble economically and maintain its multicultural balance in order for it to survive. The final vote tally showed that the proposition went away victors, with 63% of the votes.

Mohammad Khamsya Bin Khidzer is a research assistant with the Society and Identity Cluster at IPS. He also helped with the conceptualisation of Singapore Perspectives 2015.