SP 2015 Dialogue: Singapore at a crossroads 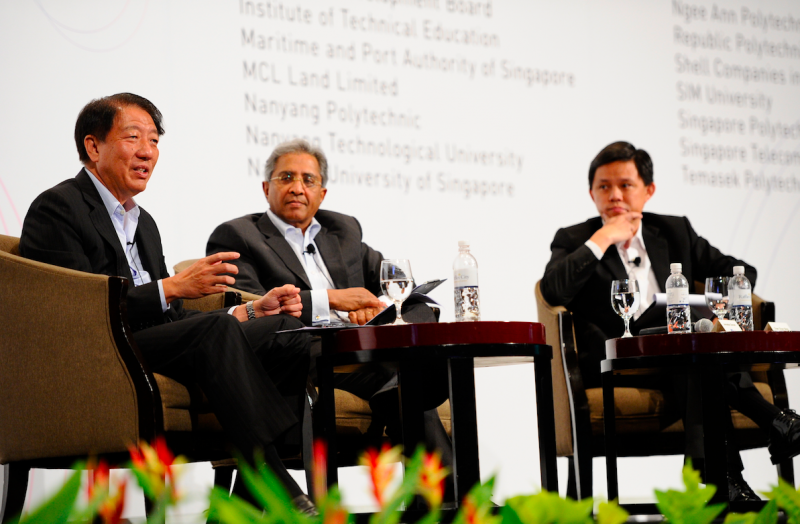 With new challenges we face today, to remain united, Singapore has to look for new values while keeping our vulnerabilities in mind.

Singapore Perspectives 2015 concluded with a dialogue session helmed by Deputy Prime Minister (DPM) Teo Chee Hean and Minister for Social and Family Development Chan Chun Sing. Chaired by IPS Director Janadas Devan, the dialogue session elicited a wide range of questions, including ones on national identity, welfare policies, immigration, our ageing population and increasing political diversity in society. Both ministers agreed that Singapore is dealing with new challenges today and to remain united, Singapore has to look for new values while keeping our vulnerabilities in mind.

To the first question on national identity, DPM Teo and Minister Chan provided personal anecdotes to illustrate how Singapore’s identity has evolved. DPM Teo related that he grew up in the 1960s – a time when Singapore was developing her identity as a multiracial country. At that time, the memories of struggling to survive were still fresh in the minds of Singaporeans and that became an impetus to unite. For Minister Chan, although sharing collective memories was a useful anchor, it was insufficient in bonding Singaporeans. Today’s Singapore is at a crossroads and needs to balance that “backward-looking” facet of national identity with a new set of ideals. Even though the term “Singaporean” is now widely accepted, our independence should not be taken for granted, said Minister Chan.

When asked if Singapore’s recent strategy of addressing welfare needs is another form of pragmatism, Minister Chan replied, “You cannot be pragmatic without any ideals to guide you, and you cannot expect things to happen if you are not pragmatic.” The Ministry of Social Development aims to help the most financially disadvantaged members in society but it is a challenge to implement this goal into policy, said Minister Chan. There are practical human factors in play that complicate things. For instance, instead of providing universal subsidies, the subsidies provided by the Early Childhood Development Agency are tilted towards lower-income families. Families earning less than $1,000 need only pay $3 per month for each child to obtain childcare services. This “token sum” encourages families to be responsible for their problems and does not rob them of their dignity. However, financial assistance does not fix other social problems that these families face, like providing a stable environment for the children. Going forward, Minister Chan shared that the government will focus on “more intensive intervention”.

Referring to housing and education policies of the 1970s, DPM Teo emphasised that welfare policies have vastly improved the lives of many. Today, they have evolved to suit an ageing population. He cited the Pioneer Generation Package and MediShield Life as examples. Unlike some runaway welfare systems that spend excessively, the pragmatic design of Singapore’s policies ensures that they are sustainable. The policies are financed without dipping into the future generation’s pockets, he said.

In response to a question on how healthcare policies will cope with smaller families today, where each child bears a heavier burden of the elderly’s hefty medical costs, DPM Teo said that MediShield Life’s intention is precisely to avoid having the young pay for the old. With MediShield Life, “you can do intergeneration transfer yourself,” he added. Subsidies are less for a young individual who has earning capacity but increases when one gets older.

Another participant asked if the pioneer generation package would be extended to future generations. Such a possibility would occur “only if the government has the means,” said Minister Chan. Finding ways to fiscally sustain these welfare policies is critical. Politicians who dish out subsidies during an election should be questioned by an “enlightened electorate” on their ability to finance these schemes. Asking tough questions prevents subsidies from being exploited as a bait to garner more votes, he added.

When asked how the government intends to double its productivity while halving the inflow of foreign workers, Minister Chan emphasised Singapore’s need for foreigners but said the key is to strike a balance between attracting and assimilating them. Competing globally with just a 2.5-million Singaporean workforce is difficult, thus new industries are introduced to strengthen it. DPM Teo pointed out that due to an ageing population there are more citizens leaving than entering the workforce, agreeing that foreigners are necessary to boost the labour force. Another reason, said DPM Teo, is that more Singaporeans are taking up PMET professions and foreigners are needed to fill the rest of the jobs. Replying to the first part of the question on productivity, DPM Teo said, the unions, employers and government agencies have formed a tripartite collaboration to train workers and increase efficiency.

Another participant asked how the new norm of political diversity should be accommodated without compromising on Singapore’s survival. DPM Teo said while the government can utilise different opinions to improve policymaking, diversity should not be an end in itself. Having different perspectives is a good change although a luxury on two fronts: first, because Singapore is not in a major crisis, we have the time to hold discussions; second, although all possibilities should be examined in an academic setting, the government is pressed to make a decision; otherwise it will be caught in a stalemate. Agreeing that political diversity is an asset, Minister Chan added that society needs to seek consensus after exchanging views and should not forget that Singapore’s independence, religious and racial harmony and respect among other countries has been hard earned. He cited the 2013 Little India riots as an example of recent fissures in society and said that to maintain Singapore’s success, new fault lines as divisive as issues of race, language and religion should not be left unresolved.

As a closing question, the two leaders were asked what advice they would give to Singaporeans who are feeling anxious about the future. Minister Chan reiterated that to stay united, Singaporeans need to sometimes jettison individual preferences for the “greater good.” He is also confident that we can “stay rooted” and look for “a set of ideals that will guide us”. Echoing Minister Chan’s point on the need for unity, DPM Teo added that caring for one another “like family” is important.

Tng Ying Hui is a project writer at IPS.