Preserving Tangible Links to the Past 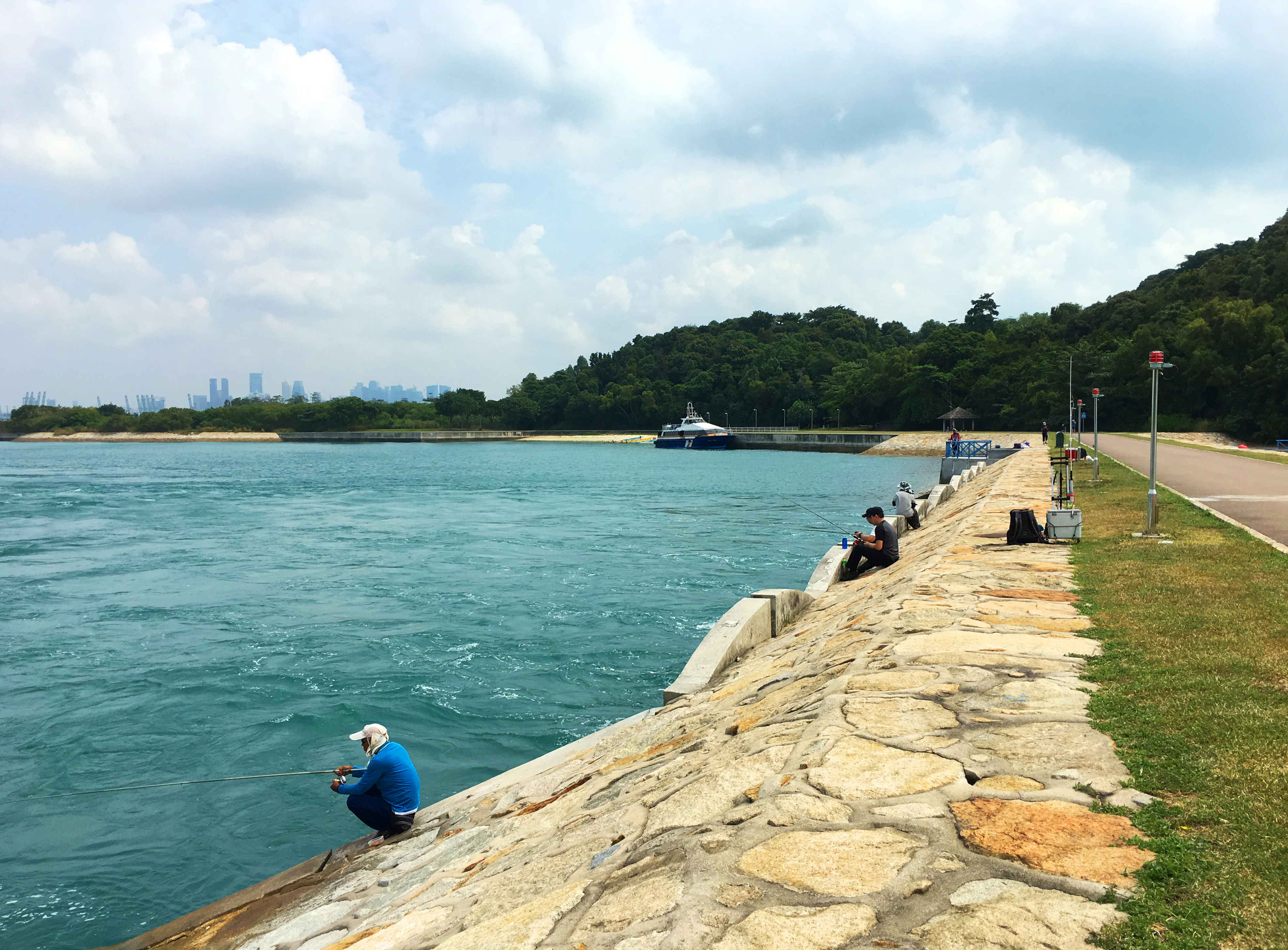 Stepping out of the ferry that docked at the St John’s Island pier, I was struck by the sharp contrast between past and present. Amidst the idyllic scene of swaying casuarina trees and a languid swimming lagoon were signs of the island’s dark past. Watchtowers, floodlights and barbed wire fences dotted the background, harking back to the island’s grim history. Formerly known as Pulau Sakijang Bendera, the island located off the south coast of Singapore was previously a quarantine station for cholera victims. It was later turned into a detention centre for political detainees and drug rehabilitation base.

Today, the island is a tranquil haven. Lush vegetation fills the space between the wooden kampung houses. On a typical weekend, anglers cast their lines, tourists pose for photos, couples sunbathe on the beach and families picnic in the shade of the trees. As I strolled along the tree-lined path, I wondered about the surviving family members of the political prisoners and the former inhabitants of the island. Were any of them still to be found in Singapore?

Little has been written about these fringes of Singapore’s rich history until recent efforts to curate and publicise the different aspects of our island heritage. In the documentary project Island Nation, three young Singaporean photographers, Edwin Koo, Zakaria Zainal and Juliana Tan captured the stories of people who once inhabited the islands of southern Singapore, including St John’s Island and Lazarus Island. The videos uploaded on the project’s Facebook page and YouTube channel reveal the islanders’ memories and anecdotes of island living. This is a positive step towards fostering deeper appreciation of the former islanders’ complex relationships with the sea, mainland Singapore and the neighbouring Riau Islands.

The Other Singapore Story

Singapore once had more than 70 islands but reclamation works over the years have resulted in the reconfiguration of our landscape. Today, only 40 islets remain. Several offshore islands, which were once inhabited, have since been re-designated for non-residential use and their occupants relocated to mainland Singapore. These “forgotten” islands not only provide a visual link to our past but also offer a snapshot of what life was like for those who lived on Singapore’s offshore islands. Some islands provide a tangible link to the murky episodes in our nation’s past.

An island with a colourful history worth telling is Pulau Senang. While it serves as a military area today, it used to house a penal rehabilitation facility for criminal gang leaders from 1960 to 1963. The island was also the site of a violent prison riot that occurred on 12 July 1963, which led to the deaths of at least three prison officers and resulted in the prison’s closure. Subsequently, 18 men were executed for their role in the prison riot. Pulau Senang stands as a stark reminder of the political instability and social unrest in Singapore’s turbulent pre-Independence years.

To close the knowledge deficit about our offshore islands, especially among younger people, information about the islands can be incorporated into the national education curriculum. It would be especially interesting to include both historical records and personal accounts of people who used to live there. This would provide students with an appreciation of the present peace and stability and also emphasise how past tumultuous events shape our national resilience and nation-building struggle. Greater understanding about the history and contributions of our islands would also enhance our collective memories and instil a sense of national identity and belonging. Organisations such as Singapore Heritage Society, which is a valuable source of information on the islands’ past, could organise seminars for those who want to learn more.

Singapore’s outlying islands also provide a perspective on economic development. The large-scale reclamation and re-zoning of the islands’ boundaries highlight the over-arching theme of economic growth and progress in Singapore’s nation-building narrative. Indeed, the first-hand accounts of resettlement of islanders to mainland Singapore are bittersweet. Pulau Seking, home to the last village in Singapore’s Southern Islands, was designated to create the Semakau Landfill. The island’s residents were forced to give up their rural way of life and relocate to mainland Singapore for the sake of national development. Some had to burn their wooden fishing boats, as there was no space to store them. These individual tales of displacement are worth passing on to future generations, lest we forget the sacrifices made by the generations before us.

In August 2014, the “Balik Pulau: Stories from Singapore’s Islands” exhibition was held as part of the Singapore Heritage Festival at the National Museum of Singapore. Similar exhibitions could be held in public libraries and community spaces across Singapore, for they are crucial in providing an alternative account of our Singapore Story — one that goes beyond political upheaval and economic transformation to give insights into what we had to let go in order to move forward. Using archival materials, disparate parts of Singapore’s history not recorded in school textbooks have been pieced together and incorporated into the broader narrative of Singapore’s nationhood.

Today, the social and economic significance of the islands has changed drastically, a result of how visitor profiles and activities on the islands have evolved.

Sentosa Island, for instance, has turned into a playground for both local and foreign tourists. Formerly used as a military fort in the 1880s and later, a prisoner-of-war camp during the World War II Japanese Occupation, Sentosa was home to villagers and a rustic getaway for other Singapore families in the 1960s and 1970s. It now hosts a plethora of leisure attractions and upscale hotels. With its man-made beaches, verdant forests and recreational amenities, the island attracted 19.4 million guests between 2014 and 2015, according to the Sentosa Development Corporation. In addition, the island houses a 117-hectare gated waterfront residential development comprising condominiums, terrace houses and villas dotted across its sprawling grounds, unlike the high-rise, high-density physical environment of mainland Singapore. Sentosa today is home to an exclusive, transnational elite community, a far cry from its humble beginnings.

On Singapore’s Southern Islands, which once hosted thriving fishing communities, and residents used to lay traditional fish traps called “bubu” on the seabed, the fish-farming industry is now being revived. The location of a barramundi farm off Pulau Semakau is a promising sign. The 7.5-hectare farm produces approximately 500 tonnes of fish annually. Perhaps, as more food fish farms operate in the area and expand their operations, some of our Southern Islands could be designated as commercial aquaculture zones. This would ensure a sustainable supply of high-quality seafood for domestic consumption and export.

More can also be done to preserve the role that the islands have played in our socio-cultural history. Take the folklore surrounding Kusu Island for example. Local legend tells of a giant tortoise that transformed into an island to save two shipwrecked fishermen. A Taoist temple and a Muslim shrine were erected there, and today, they still attract droves of visitors and devotees to the island. In a uniquely Singaporean context, the visitors to the islands encompass a diverse spread of ethnicities and religions. These island sites symbolise Singapore’s multi-ethnic approach to religious traditions, and the ethnic diversity of Singapore society. To halt the falling number of visitors to Kusu Island, religious festivals and cultural tours could be organised to maintain its relevance to Singapore’s social history.

As we embark on the next phase of nation-building beyond SG50, it is timely to include our islands and their past and present inhabitants into our social history. It is encouraging to see government bodies such as the National Heritage Board and Friends of Ubin document Pulau Ubin’s social history and share memories of its community life. Hopefully, more of such research projects will be extended to other islands.

I envision a Singapore where our islands not only remain relevant to the younger generations but are valued as sanctuaries. My wish is for Singapore to be a place where everyone, from nature lovers and partygoers, to outdoor adventurers and history lovers, can find their own space and partake of the natural treasures that abound in our islands.

A comprehensive national strategy and informed policymaking are needed to retain and enhance the rustic traits of our less-industrialised islands for future generations of Singaporeans. Just as important is public awareness and community effort. Hopefully, Singaporeans will still be able to experience and enjoy the diversity and unique qualities of our offshore islands as we do today, subsequently revitalising our relationship with the islands. To ignore them would be to write off an important part of the historical narrative that makes up our social identity.

Paveena Seah is a Research Analyst at the IPS Social Lab, a centre for social indicators research.