Political Party Branding and the Perceptions of First-Time Voters 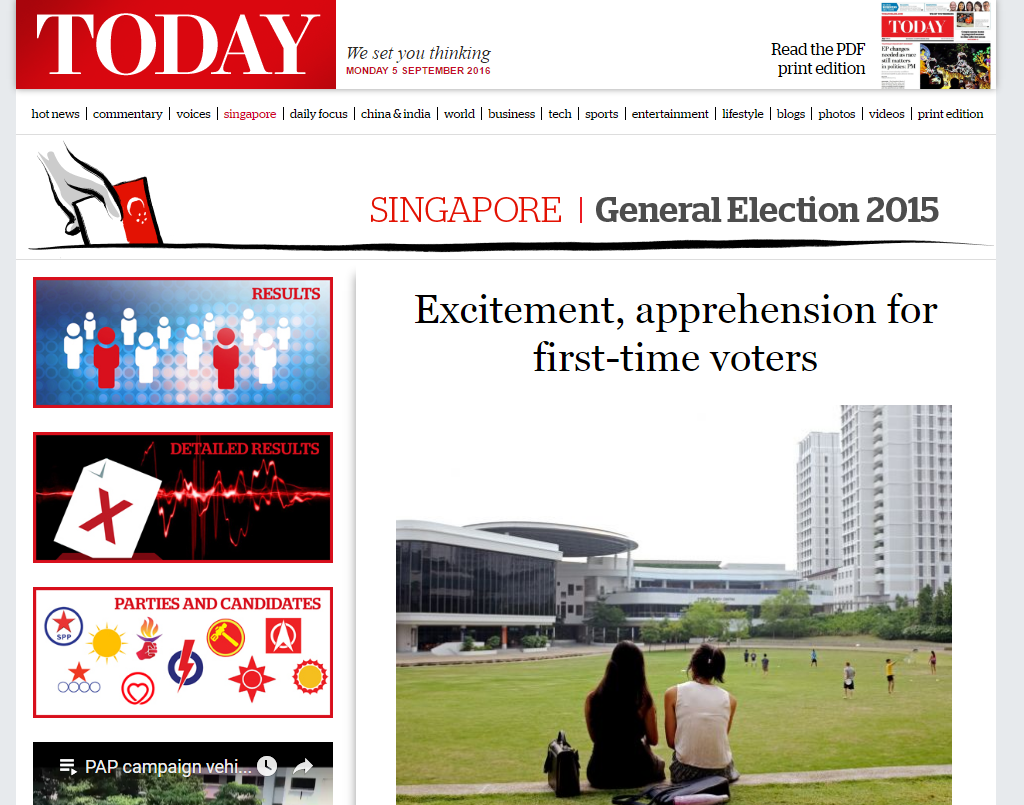 From January to April 2016, I conducted research on how first-time voters in the 2015 General Election perceived political parties here. This was part of my final-year independent study module at the National University of Singapore, for which I submitted a paper titled “Party Brand Perceptions Amongst First-time Voters in Singapore”.

Examining political parties as brands can offer unique insights that surveys on voter attitudes may not uncover. This is because how voters perceive a political party is not based on the party’s policy positions and beliefs alone.

Rather, this brand perception is likely to be based on a network of information and experiences. This information can come from varied sources and may not be rigorously examined. For instance, a voter’s perception of a party could be shaped by one encounter with a party member, or hearsay.

I surveyed 77 respondents born between February 1990 and February 1994, who were newly eligible to vote in GE2015, which took place last September. Among other things, I asked them to list descriptive words or phrases that they associated with the three top-performing parties in GE2015 — the People’s Action Party (PAP), Workers’ Party (WP) and the Singapore Democratic Party (SDP).

Subsequently, I conducted focus group discussions with 19 respondents to build a “map” of descriptions associated with the party (see Figures 1 and 2 below). I then assigned positive or negative values if any, to the descriptions, and asked for explanations of the choice of descriptions used. 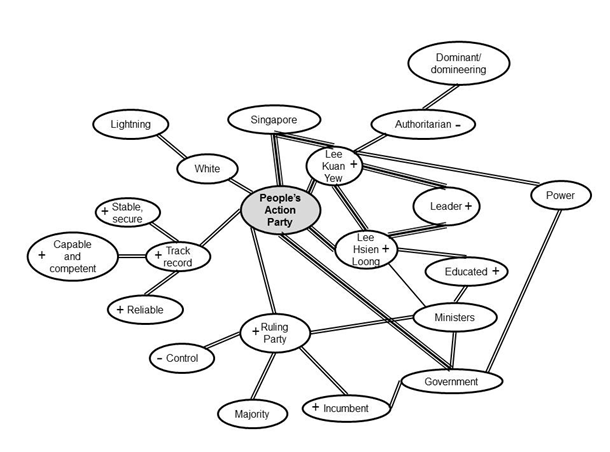 Their names were also associated with other descriptions, which then contributed to the overall brand perception of the PAP. For instance, a participant described the late Mr Lee as “more assertive, must do things a certain way so in a sense, that’s where the authoritarian part comes from,” while PM Lee Hsien Loong was described as “more of a people person”. The PAP was also perceived as synonymous with the state and the government in Singapore. Voters closely associated the PAP with words and phrases like “ruling party”, “government”, “Singapore” and “track record”. The WP’s brand was most strongly associated with the word “opposition”, and loosely associated with phrases like “trying but not there yet” and “strong and credible opposition”. This was borne out by the focus group discussions, where some participants said that the WP was “strong and credible” but others felt that while the party was working hard, they were “not there yet”. The WP was also associated with its key leaders, constituencies and election rallies, which have generally drawn larger crowds than most PAP rallies.

The PAP had more descriptions associated with it than the WP and a higher proportion of positive to negative associations. I then investigated the reasons for these differences.

I found that more descriptions of the PAP demonstrated how respondents felt towards or thought of the PAP — for instance, “reliable”, “stable and secure” and “capable and competent”. In contrast, there were more descriptions of the WP that related to superficial aspects of its identity, such as individuals associated with the party, and issues and phrases that had been used in relation to the party, such as “duckweed”, “blue” and “accounts and finance”. In the focus group discussions, there were participants who commented that the WP was associated with descriptions that were less about their fundamental qualities and more specific to particular issues or events, when compared with the PAP.

However, this is not necessarily bad for the WP. It may just mean that the WP is at an earlier stage of their brand building with younger voters, and they should highlight positive tangible characteristics to ensure that their identity is more salient to voters.

Moving up the “value chain”

In general, parties looking to move their brand up the “value chain” should build brand awareness and manage voter perceptions. In the WP’s case, it may want to communicate its broader vision, values and principles more frequently and on different platforms. While this may take time and will require consistent exposure, it is necessary to build an enduring brand.

But even as they work to build their brands, political parties should realise that voter perceptions may be incongruent with the image they are trying to project. For instance, some participants in my study experienced cognitive dissonance within their own brand perceptions. They admitted that their impressions may be biased or inaccurate but pointed out that these impressions still had an effect on them. Efforts to describe the party’s vision and values more frequently could help to address this, but the parties should also pay special attention to what other sources are saying about their party brand.

This study has its limitations — one being the small sample size of respondents. However, it does reveal the types of insights that political parties could glean from brand perception studies. By getting a sense of public sentiment, and how the parties are perceived relative to each other, political parties can see how to improve their communication of what their party brand stands for. This could enhance their appeal to voters in elections.

Anna Leong recently graduated from the NUS Business School and is currently working in the public sector. These are her personal views.