Making a good programme even better 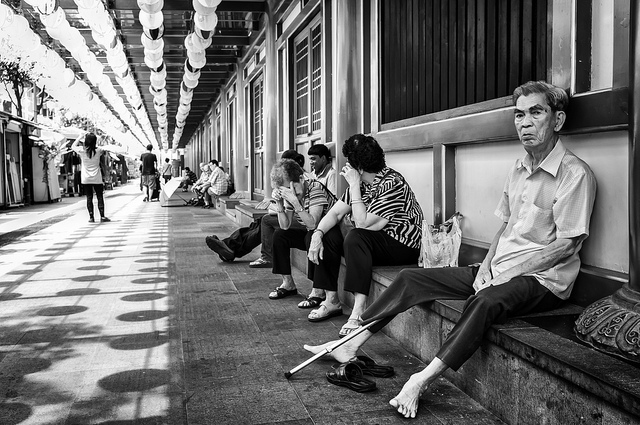 Nobel Prize-winning economist Robert Merton has said that a goal-oriented approach to retirement savings would likely yield an inflation-protected income at retirement, but would not result in wealth accumulation.

By Joseph Cherian and Danny Yong

Nobel Prize-winning economist Robert Merton has said that a goal-oriented approach to retirement savings would likely yield an inflation-protected income at retirement, but would not result in wealth accumulation. Indeed, this way of thinking has perhaps resulted in the savings and life annuity payout components of our current CPF system. This is good news.

We take it that people planning for retirement have three main concerns about retirement funding: First, that they receive a reasonable payout every month; second, that the payouts should last for as long as they live; and third, that the payouts keep pace with inflation.  The CPF Minimum Sum, which is converted into a CPF Life annuity product upon an individual’s retirement, broadly meets these concerns. However, the CPF Life annuity payout is not inflation-indexed.

Should the concerns over retirement funding end there? Not really. Individuals should also consider if retirement funding can give them the standard of living they want, or are used to. We think that qualified members of the CPF – and by this, we mean those who have the potential to accumulate (or have accumulated) more than the mandatory Minimum Sum during their productive working years – should be allowed to participate in an enhanced retirement savings scheme, where they can benefit from the long-term performance of well-diversified portfolios.
For convenience, let’s call this enhanced scheme CPF “SoShiok” Life. It has two features not found in today’s CPF scheme. First, the standard life annuity monthly payout component (say, the estimated $1,200 per month generated from a Minimum Sum of $155,000) will be inflation-indexed annually. Second, members will be allowed to invest any savings in excess of the Minimum Sum in a number of well-diversified portfolios, depending on their risk tolerance level.

The mechanics of CPF “SoShiok” Life

How would such a retirement savings product work? It would require some tweaks to the existing CPF system. First, unlike in the current system, CPF savings would be directed purely to retirement expenses and not used for other means, such as housing down payments and deposits, children’s education and current medical expenses. Second, a mandatory portion of CPF savings would be “ring-fenced” in a Minimum Sum Retirement Account (MSRA), which would cumulate at the CPF’s current, tax-exempt riskless interest rate range of 2.5 to 5 per cent (preferably, this rate should be inflation-indexed) up until retirement. Upon retirement, the inflation-indexed CPF Life annuity – with income deemed sufficient to cover basic life needs and medical insurance payments from retirement to death – is purchased using funds from the MSRA account.

By “ring-fencing” a portion of CPF savings, those who have managed to save more than the requisite Minimum Sum will have the opportunity to enhance their retirement nest egg. An optional “SoShiok” Retirement Account (SSRA) can be set up in parallel to the MSRA. Any CPF savings over and above that which is mandated towards the MSRA can cumulate in this SSRA account at the default riskless interest rate, say, the current 2.5 – 3.5 per cent interest on Ordinary Accounts (OA), or a range of long-term performance of well-diversified portfolios with different investor risk tolerance levels, such as conservative, moderate or aggressive, chosen by the CPF member. At retirement, the cumulated savings in the SSRA can be used to purchase a CPF “SoShiok” Life annuity product, which pays according to the long-term performance of another (or the same) well-diversified portfolio with a particular investor risk tolerance level. As Figure 1 indicates, if the performance of this portfolio for a particular year is below zero, the retiree will only receive the default monthly payout from the standard CPF Life annuity, and nothing from the CPF “SoShiok” Life annuity. And in the good years, if the payout is above zero, the retiree receives income from both, the Life Annuity and the SoShiok Annuity. 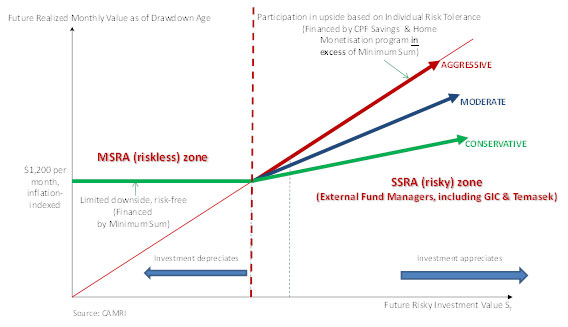 Needless to say, the administration of the joint MSRA and SSRA programs during the savings years should be user-friendly, seamless and fully transparent to members once they have made their voluntary investment choices.  This same philosophy should apply to the retirement income payout years as well.

Such an “incremental” product has no element of regret: if the well-diversified portfolio loses money in a particular year, as most risky portfolios did during the Global Financial Crisis of 2008/09, there will be no gnashing of teeth or beating of breasts since retirees would still receive the basic CPF Life riskless annuity payout. And in a good year (or years), the retiree gets to participate in the upside performance of the CPF “SoShiok” Life annuity product by receiving additional income in that retirement year.

Most defined contribution plans give contributors free rein to make investment decisions. But some people develop investor paralysis when faced with too many investment options. It would be helpful to have a user-friendly and limited menu of a range of well-diversified, low-cost portfolios that suit different investor risk tolerance levels. A portfolio for conservative investors could, for example, comprise stakes of roughly 80% of its assets in high-quality bonds and cash, with the remaining 20% in high-quality, blue chip stocks. The portfolio for moderate investors could comprise roughly 50% in bonds, cash and convertibles, with the remaining 50% in stocks, commodities and lower-volatility hedge funds. For aggressive investors, their portfolio could comprise 30% in bonds and convertibles, with the remaining 70% in stocks, commodities and higher-volatility hedge funds. Given the popular demand for GIC’s and Temasek’s returns, the longer-term total returns of such government-linked portfolios could also be thrown into the pot. They are after all well-diversified portfolios themselves.

Our suggestions are aimed at making the CPF scheme even better. Yet, we recognise that ensuring optimum retirement savings for Singaporeans also depends on a variety of other factors. Here are some additional caveats, comments and suggestions on how to improve our social security savings scheme.

They include the following:

Professor Joseph Cherian is Practice Professor of Finance and Director of the Centre for Asset Management Research & Investments (CAMRI) at NUS Business School. Mr Danny Yong is CIO and a founding partner of Dymon Asia Capital, an Asian Macro hedge fund based in Singapore, with over US$4 billion of assets under his management. This article is based on a conversation the authors had during a forum about offering such a product (circa June 2013), and a presentation made by one of the authors at the Institute of Policy Studies’ Forum on CPF and Retirement Adequacy on 22 July 2014. Presentation slides from the IPS Forum can also be found here.