In Low-Crime Singapore: Understanding the Link between Diversity and Crime at the Neighbourhood Level 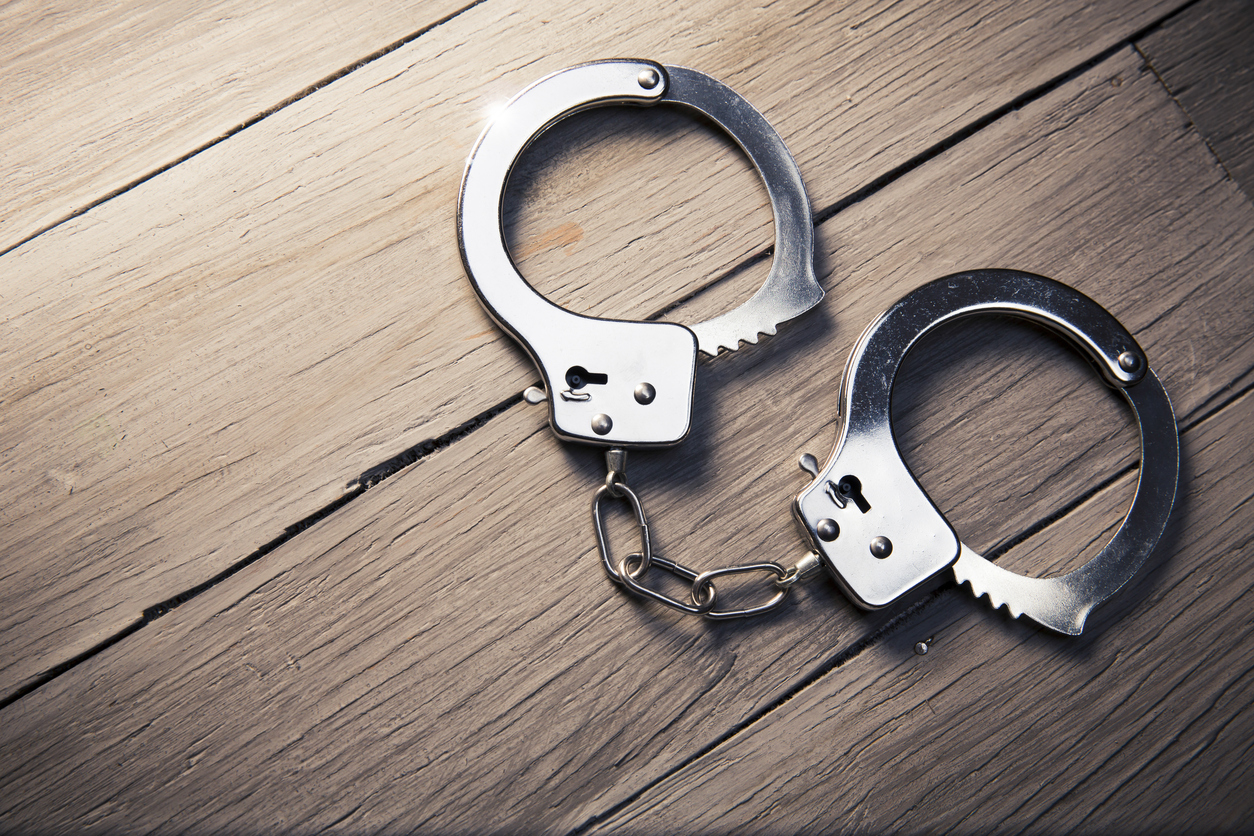 We have heard from managers about the merits of diversity within organisations, whereupon a more diverse workforce tends to produce more effective teams, be more effective at problem-solving and musters greater innovations. When it comes to diversity in residential communities, however, the effects are mixed.

Several social science researchers have pointed to the link between diversity and social capital, and diversity and crime rates, in neighbourhoods. For instance, American political scientist Robert Putnam has written on how ethnic diversity negatively affects social capital, trust between members of a community, and how much they are willing to contribute to collective goals.

Another study done in 2007 by sociologist John Hipp, in the United States, found that the more ethnically diverse a community is, the higher the crime rate. This is after controlling for income inequality within the community. The implication is that more ethnically heterogeneous communities have weaker social bonds and less trust, leading to more crime within their neighbourhood. It bears clarifying that a more diverse neighourhood in this case does not imply a lower socio-economic standing; it simply means that there are fewer people who share a similar background.

On the other hand, a Canadian study, in 2007, found no significant associations between diversity and the erosion of social bonds within neighbourhoods in Vancouver, Toronto and Montreal. In the UK, researchers continue to debate whether or not ethnic diversity or socioeconomic factors exert greater erosion on the social networks in a community. In Asia, while there is research on workplace diversity, little has been done on examining the effects of neighbourhood diversity.

Diversity and its effects in Singapore’s Neighbourhoods

Singapore is the second safest country in the world, as ranked by the World Justice Project Rule of Law Index 2014.

That said, in July this year, IPS Social Lab looked at publicly available government data to assess if there is any link between neighbourhood diversity and the crime rate in different areas. We wanted to see whether areas in Singapore that are more diverse in terms of household structure, dwelling types and number of rental households have different levels of reported crime cases.

Interestingly, we found no correlation between ethnic diversity and crime rate, even though there are varying degrees of ethnic diversity across the different areas we looked at. The lack of a significant link may be due to the Singapore government’s long-standing policies to promote interaction and understanding among Singaporeans of different races, such as through the Ethnic Integration Policy in Housing and Development Board estates to ensure a mixture of residents from different racial background. Thus, our findings suggest that, unlike in other countries, ethnic diversity in Singapore is not a factor in an anti-social behaviour like crime.

In the IPS Social Lab study, we looked at 28 of the 55 of planning areas demarcated by the Urban Redevelopment Authority (URA). Planning areas such as Sungei Kadut, Rochor, Newton and Pioneer were excluded due to their low population density that might skew our analysis.

Using data from the General Household Survey in 2015 compiled by the Department of Statistics, we studied a range of socioeconomic indicators in each planning area, including: income, ethnicity, marital status, dwelling type, household structure, language spoken at home, and tenancy status. We used the Blau Index – a measure of heterogeneity commonly used by sociologists – to calculate the level of diversity in each data type in each planning area. For example, an area with a high Blau Index for dwelling type diversity would entail having a wide mixture of private housing, HDB flats of various room sizes in the same neighbourhood.  Conversely, a low dwelling type Blau Index will see very similar housing types within the same area.  We then correlated the Blau indices with the percentage of overall crime cases in 2015 (per 100,000 people in Singapore). 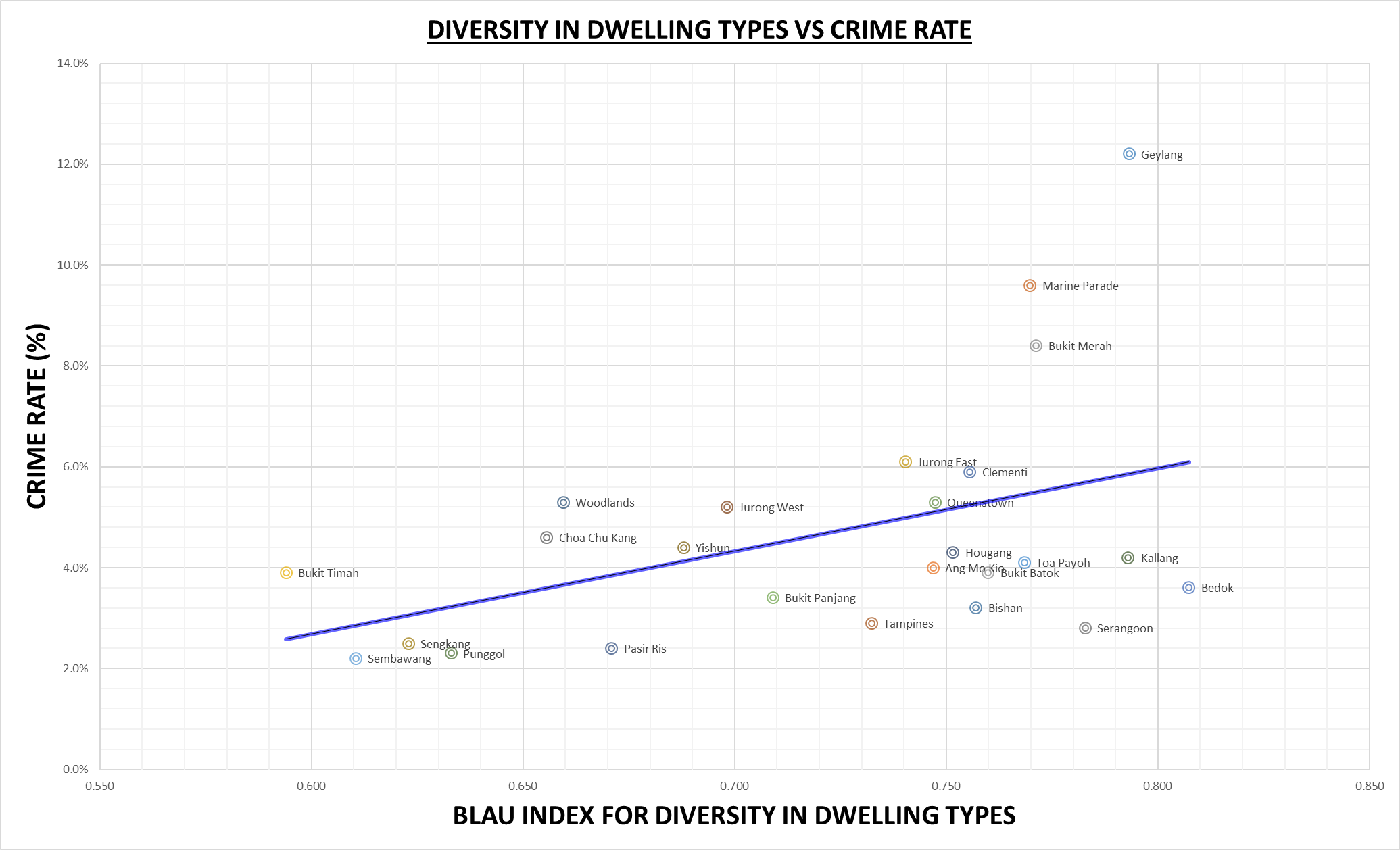 An area with a high Blau Index for dwelling type diversity would have a wider mixture in terms of private housing, HDB flats of various room sizes in the same neighbourhood. We correlated the Blau indices with the percentage of overall crime cases in 2015 (per 100,000 people in Singapore). This graph shows that for areas with higher diversity in terms of dwelling types, crime rates are also correspondingly higher.

The findings from our study suggest a few things. Similar to research done in the US, neighbourhoods in Singapore where residents have greater diversity in terms of socioeconomic potential (e.g., mixture of households with varying levels of income) and family backgrounds (e.g., mixture of single-member, couple-based and single-parent households), tend to experience higher crime rates.

One possible reason could be that there are weaker social bonds between neighbours from different socioeconomic and familial background, which consequently discourages them from looking out for each other and proactively participating in the well-being of the community.  This is a scenario similar to the social portrait painted by Putnam and Hipp.

On the other hand, contrary to what is commonly observed in European and American cities, ethnic diversity in Singapore is not related to crime. The lack of a significant correlation with race but not socioeconomic differences suggests there is considerable variability within each of the three ethnic groups in terms of dwelling types and family background.

To be clear, higher crime in neighbourhoods does not imply that the residents are perpetrators as they are just as likely to be the victims.  What is crucial is how these neighbourhoods can foster mutual trust, and a stronger community spirit for the prevention of crime and other anti-social behaviours.

There are lessons to be learnt yet from the corporate world about diversity. If heterogeneity is linked to a more resilient and productive work culture, then perhaps we should harness neighbourhood diversity for the well-being of its locals.

At the local level, for instance, residents and social enterprises could develop projects to serve the community’s needs and promote trust among residents from diverse socioeconomic groups. They may also seek seed money or grants from Community Development Councils, highlighting the greater need to preserve social cohesion among residents in diverse neighbourhoods.

At the national level, can our schools or Town Councils be allocated a larger operating budget if the socioeconomic profiles of the students and constituents are more diverse than the national average? This extra allowance can support programmes that promote greater civic engagement and participation at the local level, and consequently, nurture the sense of neighbourliness that could help to reduce the incidence of crime at the local level.

Policymaking for a diverse population is not new to Singapore, which has found ways to benefit from its multicultural diversity. We will also have new forms of diversity, brought on by global economic volatility and evolving social values linked to family formation.

It is timely to consider what these diversities might be, and in particular, the impact they can have on the social fabric of Singapore at both national and neighbourhood levels.

Dr Leong Chan-Hoong is Head of IPS Social Lab and Senior Research Fellow at the Institute of Policy Studies of NUS.  Ili Kaiyisah Rahan is a recent graduate of the University of British Columbia, and was an Intern at the IPS Social Lab earlier this year.

A version of this piece for Lianhe Zaobao was published on 4 December 2017.