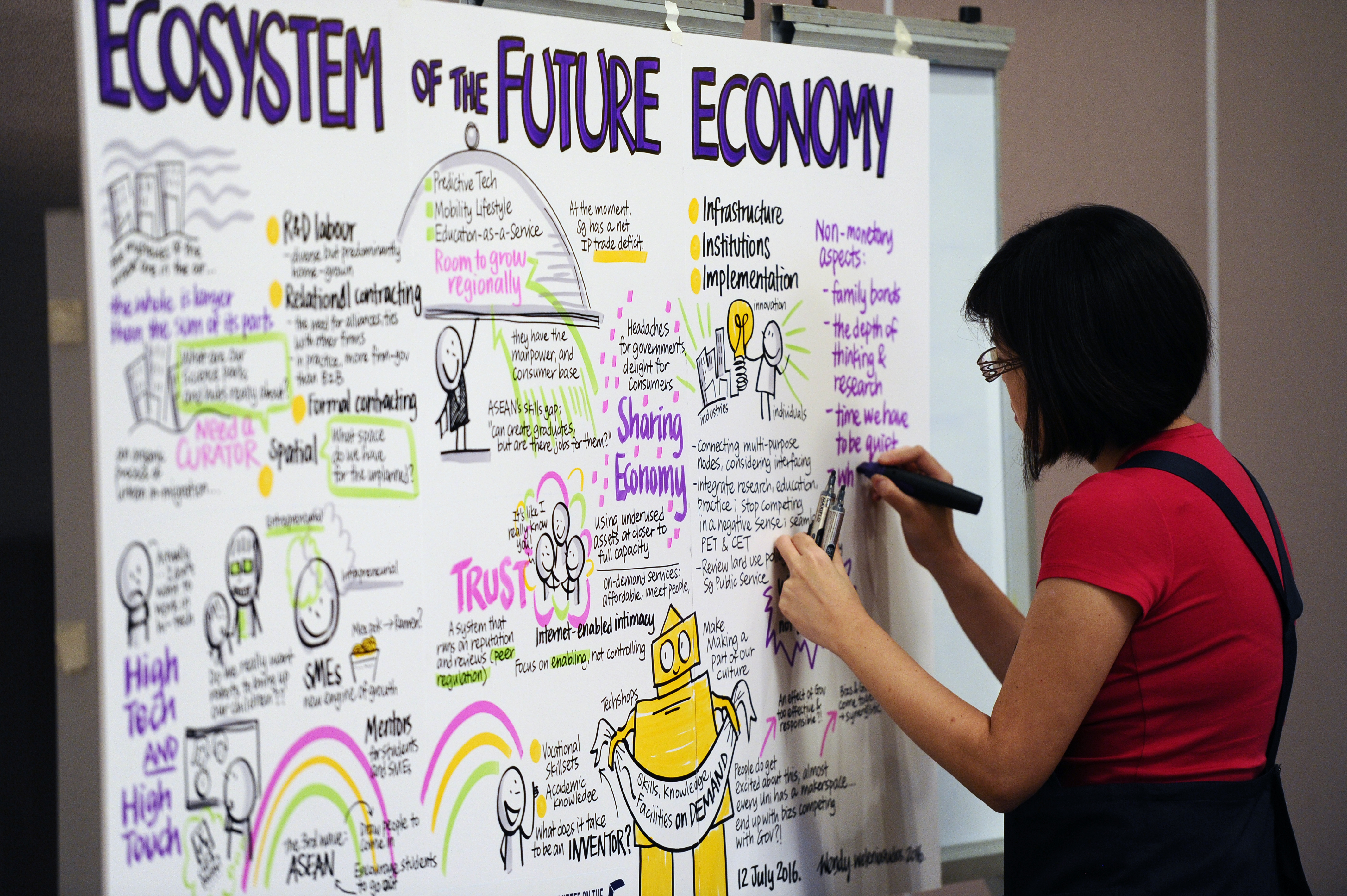 At the 2016 National Day Rally, Prime Minister Lee Hsien Loong said that disruption is the defining challenge that the Singapore economy will have to deal with. He observed: “Old models are not working, new models are coming thick and fast, and we’re having to adjust and to keep up, because of technology and globalisation. And the disruption will happen over and over again, relentlessly.”

To prepare the economy for the disruptive future, PM Lee said that government economic agencies including the Economic Development Board, International Enterprise Singapore and SPRING Singapore would work with various stakeholders to ensure that firms and the local workforce are future-ready. The Committee on the Future Economy (CFE), which was formed earlier this year, will also propose and develop new economic strategies for Singapore,

These measures are the government’s response to economic challenges. However, to be truly prepared for a disruptive economic future, top-down solutions are insufficient — creating the appropriate culture is also important.

To prepare for a disruptive economic landscape, the key focus should be to foster a disruptive culture that rewards individuality, creativity and risk taking. A report by the World Economic Forum in 2015 highlighted that employees today require new skills that include not just “foundational skills like literacy and numeracy”, but also “competencies like collaboration, creativity and problem-solving, and character qualities like persistence, curiosity and initiative.” This reflects the new economic landscape, which “runs on creativity, innovation and collaboration.”

Singapore however, is not totally up to the mark. It is widely agreed that such a culture is traditionally lacking in our education system. For all its strengths, DPM Tharman Shanmugaratnam conceded in 2015 that “that spirit of individuality, that free play of the mind, isn’t best developed in a system that is highly competitive and focused on tests.” A greater scope for innovation can also be injected into our higher education sector. While NUS and NTU both fared very well on the QS World University Rankings, coming in at 12th and 13th places, respectively, they fare much more poorly in the Thomson Reuters 2016 List of 100 Most Innovative Universities. NUS placed 64th while NTU was not featured at all.

This lack of individuality and creativity may be a reflection of the larger cultural norm of pragmatism that is hardwired in Singapore. While Singaporeans are not barred from unconventional pursuits or from questioning the status quo, individuals may internalise norms of pragmatism and may be dis-incentivised from pursuing the former.

A society’s culture does not and cannot change overnight. It is a slow process, but one that can be hastened if we understand the impact of institutional reforms on cultural development.

I believe two main areas of institutional reforms that are in order. Singapore should move away from a centrally planned economic system that has dominated economic policymaking since our independence. Additionally, this has to be accompanied by socio-political reforms that embrace civil liberties.

The intellectual contributions of 20th century political economist Friedrich Hayek are relevant here. Hayek argued that the market system should be understood as a “discovery procedure”, in which trial-and-error learning takes place. Over time, the process of competition would enable us to devise better goods and services and better techniques to our problems and challenges.

While Singapore’s economy is different from the socialist economies of the 20th century, the element of top-down central planning still exists in Singapore — in the form of industrial policy. This is the practice whereby the state pursues a hybrid set of policies, including targeted subsidies and incentives to spur industrial development.

Such an approach can be problematic because it assumes that innovation can be engineered top-down. But innovation cannot be planned — the notion of planned innovation is fundamentally, an oxymoron.

Accordingly, one specific area of reform would be to do away with the practice of giving out government incentives to promote productivity, restructuring and innovation. Local SMEs in Singapore for instance, are beneficiaries of a slew of incentives administered by SPRING Singapore. Such subsidies have the result of creating a “crutch mentality”, where our local enterprises become dependent on such monetary benefits from the state. Instead of investing effort and resources into creative endeavours, the availability of state privileges creates an attractive target of opportunity for entrepreneurs to divert their resources into unproductive, rent-seeking activity.

As former civil servant Devadas Krishnadas put it in an op-ed written two years ago: “We have to focus on how to induce more competition in sectors with poor productivity. If we do not, then the provision of generous grants and subsidies may well be making our firms less, not more, competitive.”

Tolerance as a practical necessity

Aside from adopting a more decentralised model of economic management, there is also a need to reform Singapore’s socio-political institutions in Singapore to make them more tolerant of diversity and dissent. Multiple studies have demonstrated that societies that embrace diversity tend to perform better economically. One such study was in 2004 by Marcus Noland of the Peterson Institute for International Economics, which pointed out that “more tolerant countries attract more FDI, obtain better ratings, and exhibit more entrepreneurship.”

One example is in LGBT inclusion in society. In 2014, the Williams Institute performed an analysis of 39 emerging economies, and observed a strong two-way relationship between LGBT-inclusion in a society with economic development.

This should not come as a surprise: People more readily create and innovate when they know their unique differences are celebrated. The case is made here that LGBT-inclusive businesses can do better in talent management, employee engagement, productivity and innovation, amongst others.

Our social policy in Singapore must therefore change. Laws that stifle social diversity are clearly evident in the Penal Code 377A, which criminalises private homosexual relations. Singapore also has strict speech laws, and there are extensive limits on freedom of association, and of the press.

This is not to say that individuals are actively victimised or not free to speak their minds. However, the existence of such laws does nothing to promote the tolerance of diversity, which is is important in the next phase of our socio-economic progress. Of course, liberalising our politics does not immediately guarantee that everyone will suddenly be enlightened. But repealing the laws would go a long way to send a positive message and catalyse a shift in cultural norms. In other words, if we change the rules of a game, we can incentivise a particular type of behaviour aligned to our goals.

Being aware that the economic landscape will be marked by disruption is already the battle half won. But that is still just half the battle. We need to understand the impact of institutional reforms on cultural development and foster the disruptive culture that is necessary for us to do well in future.

Bryan Cheang is a graduate student in Political Economy at King’s College London. He is most interested in classical liberal political theory, Austrian-school economics and public choice theory, and researches on economic development issues in the Asian region. Bryan read Political Science and History at NUS as an undergraduate and is also a founding member of the Libertarian Society of Singapore.