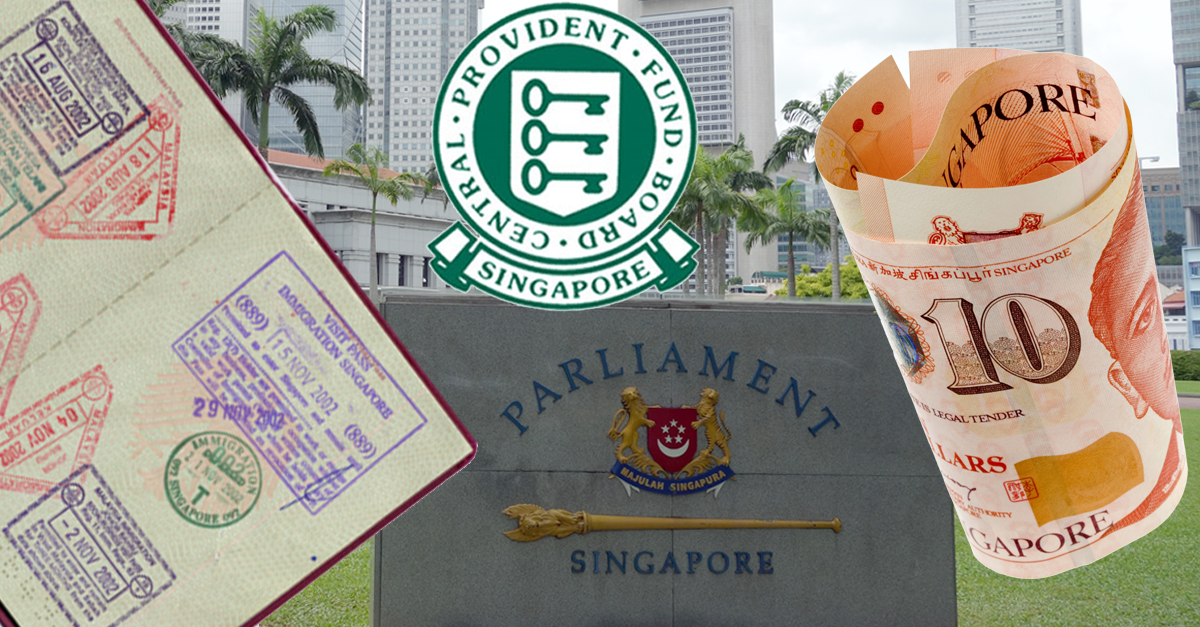 This was a hot button issue in GE2011 and the government has responded to it in the past four years on many policy fronts.

In the labour market, it trimmed foreign workforce growth numbers; introduced market-testing for key segments of the market; raised the cost of hiring foreign workers which increased the reserve price of hiring them and placed Singaporeans on a more even footing on wage costs to employers; raised dependency ratios; and made compulsory a tripartite-based progressive minimum wage called the Progressive Wage Model to ensure that low-wage, low-skilled Singaporean workers have attractive skills, wage and career pathways.

Public social infrastructure is being expanded to cope with higher population density.  Social policies have been reformed to provide a greater sense of security to Singaporeans for their lives, well-being and future.

For businesses, it provided subsidies for capital investment and the hiring of Singaporeans. It urged for the continuation of economic restructuring. Labour participation rates among Singapore residents have risen and it is not clear how much more headroom is available that can be tapped for economic growth without vast improvements in productivity.

During the election campaign, the PAP candidate for East Coast GRC Lim Swee Say pointed to how foreign worker numbers had been trimmed significantly and the Singaporean core is holding steady in the workforce at a ratio of 2:1.

The Workers’ Party (WP) said, as it did in 2013, that the non-resident population should be held constant at 1.5 to 1.6 million, provided a 1% resident workforce growth target is achieved.  It would allow a temporary addition of foreign workers if there are shortfalls and more stringent regulation quotas on a sectoral basis hitched to productivity improvements.

Here is the 2014 data on the non-resident population (refer to Diagram 1) and the top ten sectors where they are employed.

For many senior Singaporeans, they had previously understood that their money in the CPF (contributed by workers, employers and government top-ups) would be returned to them at the retirement age of 55 years old in a lump-sum withdrawal instead of being invested into an annuity scheme.  The SDP proposed that the CPF scheme be abolished and money returned fully to account holders.  The National Solidarity Party (NSP) argued for the same but acknowledged that some were worried that family members might squander their retirement savings.  Believing that only 5% of each cohort might do so, it proposed that like in the case of problem gambling, family members could be allowed to stop them from doing so.

The SDA argued that the interest payments on the CPF ordinary account savings was too small (2.5%) when the government could afford to give better returns with what was made from the money that was invested.

The WP asked for full transparency on the nature and the performance of the investment that the government makes on CPF funds, return the difference between that and the stated guaranteed return on a 10 year moving average.  It also proposed that CPF members be given the option of receiving CPF monthly payouts (CPF Life) earlier if they need to instead of waiting till the Retirement Age, which is currently 65, and the re-employment age which is the same.

The PAP’s candidate for Jurong GRC, Mr Tharman Shanmugaratnam clarified that the first $30,000 in any account holders combined balance receives 6% interest. This helps people with smaller balances even more. The next $30,000 would attract 5% interest payment and amounts above $60,000 would attract 4%.

There are two CPF Life plans that offer monthly payments of varying amounts to account holders for as long as they live.  The system has also been liberalised to allow a 20% lump-sum withdrawal from the Retirement Account but on the understanding that the amount streamed out under CPF Life would then be reduced. The WP also called for inflation protection of CPF Life.

See here and here for the changes to the CPF system introduced in Budget 2015.

Support for the leading opposition Workers’ Party rides on the belief among Singaporeans that while a strong and efficient government is important, there should be checks and balances in Parliament on the Executive.

The PAP asked if the seven elected Workers’ Party (WP) members could be held accountable for their own performance as managers of local government, specifically in the Aljunied-Hougang-Punggol East constituencies. It argued that it was a check and balance on local government in the WP-held wards and also reminded voters to think about the character, the moral character of the candidates before them.

There were disputes as to whether operating accounts were in surplus or deficit when Punggol East fell to the WP in January 2013. These were precipitated by PAP’s candidate there, Mr Charles Chong and suggestions then by the WP that this was “unfinished business” with unclear statements from the PAP about the accounts.  WP Chairman Sylvia Lim asked if it could be that “…the PAP has tried to mislead the public and damage AHPETC…again?”

M Lim sought to debunk what she termed the four myths about the larger AHPETC controversy. The WP argued that if there had indeed been wrongdoing, its candidates would have been charged in a court of law. The PAP candidates responded by saying that it was a low bar where candidates said that they should be voted in because they were good enough not to be sitting in jail.

At mid-point of the hustings, the two parties said that they would refocus their campaign on policy matters but the themes of character and competence of candidates continued to be pursued by the parties involved.  The WP assured voters in East Coast GRC that having had the experience of taking over AHPETC, it was now experienced and there would not be any similar issues arising in a second GRC. In anticipating the question of whether it could run a town council, the SDP put out its plans for how it would do so.

Even though the Consumer Price Index is actually in negative territory and real wages have risen (see pages 3-4 of this report), Singaporeans feel that the cost of living has gone up.

While the PAP Government has improved the accessibility and affordability of many basic essentials like childcare, education, home ownership and healthcare through various means, the expectations and aspirations of Singaporeans means that what they consider is “basic” has also changed as they live lifestyles similar to more affluent societies. According to the PAP, this helps to explain the perception that the cost of living has gone up.

According to the opposition parties, costs have increased because there are more people to drive up demand due to the government’s foreign labour policy but also because of the various taxes that the government uses to build up budget surpluses. They said they would continue to fight for the interests of the common man. The SDP said that Singapore should not be one of the most expensive cities in the world to live in, with wages not rising in tandem to the rise in cost of living.

The opposition said that Singaporeans were concerned if future generations would experience the same improvements that they had to their lives. This is where the issues of income distribution, wealth distribution, social mobility right across Singapore and education as a social leveller entered into the debate.  While opposition politicians say that real incomes have not risen, national data suggests otherwise.

The PAP candidate for Tampines GRC, Heng Swee Keat explained that as education minister, his view was that subsequent generations of Singaporean should be able to do better that previous ones.

The PAP said it would continue to invest significantly in education and skills training for all segments of Singapore highlighting the new initiative called SkillsFuture that would improve workplace training and build up the skills mastery of Singaporeans workers.

This would help them to be work-ready and tweak a meritocratic system that was too much hinged on academic credentials. Just before Singapore entered into election mode, the government had announced a $3bn plan to stimulate active ageing with the establishment of a National Silver Academy for senior Singaporeans to learn employment-relevant skills or develop their hobbies.

The WP devoted significant sections of its manifesto to education, suggesting that the gaps in quality of schools and teaching resources should be more equitably allocated across the country; that high-stakes testing should be dropped and even a through-train system be offered between primary and secondary school for parents who wish for their children to bypass the PSLE.  The SDP made a similar appeal to reduce school stress, remove PSLE, school and class rankings and introduce a dedicated teacher system so that educators will follow their students through a good number of years. It proposed that all schools be “single-session ones” that run from 8am, to 4pm so that students have time to complete their assignments there.

The PAP made this an election about choosing another part of the nucleus of Singapore’s fourth generation of leaders.   The opposition responded by calling on voters to ensure that the PAP government listens harder, is more responsive to their needs, and serves all Singaporeans. The leading opposition party WP emphasised in rallies and on its website how issues and suggestions listed in its GE2011 had been taken up by the government to prove that it had made an impact on governance since.  It too is blooding new members with fresh faces in Marine Parade GRC and East Coast GRC.